The WorkCell is one of the primary containers in RobWork. A WorkCell should gather all stateless elements/models of a scene. These are primarily:

that provides some help on building and editing a WorkCell. When editing a WorkCell in this plugin, the changes are reflected in the scene immediately after saving the file. Notice that the plugin can only assist the user with a few element types. The editor will be extended in the future to have assistance for a more complete set of the possible XML elements. 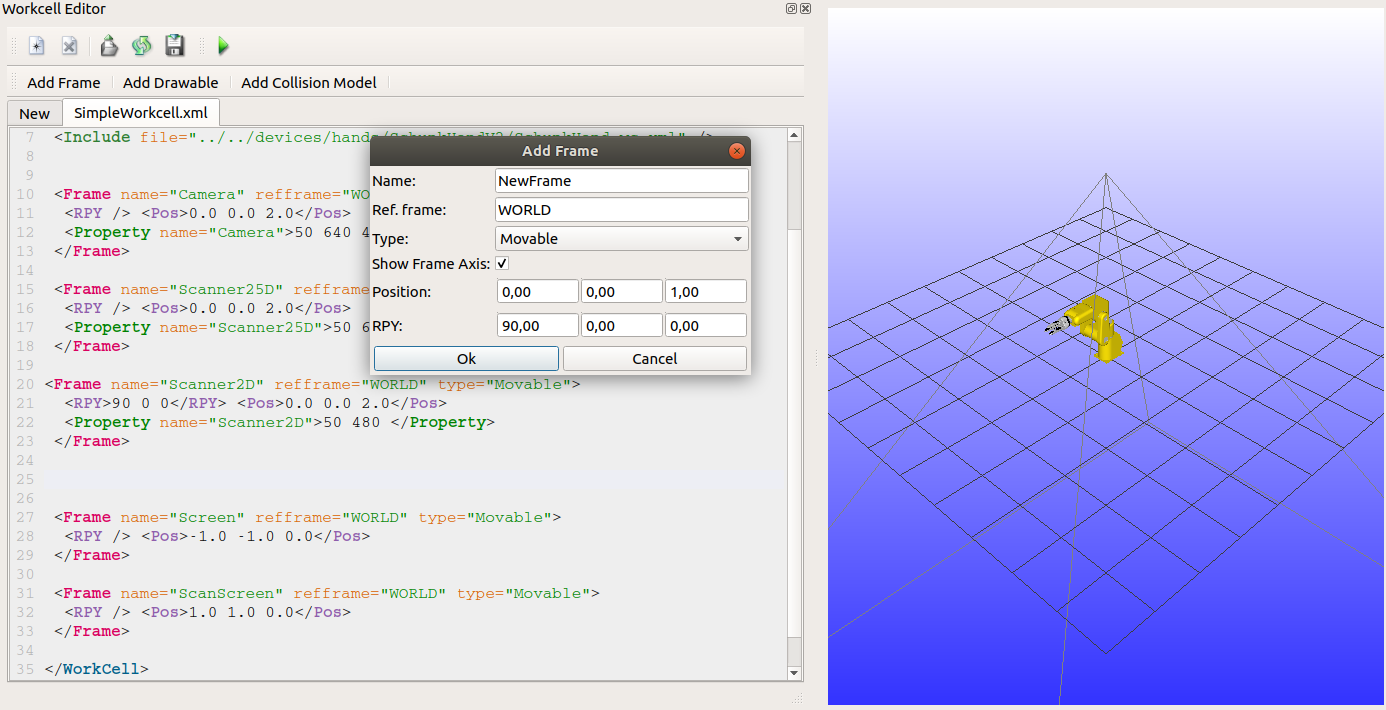 The WorkCell editor plugin is shown to the left. Changes to the XML definition here is reflected in the scene immediately after saving the file. The “Add Frame” dialog assists the user in inserting a correct Frame tag in the XML file.¶

When building a new WorkCell it is a good advice to have a look at the example scenes in RobWorkData. See Device & Scene Collection for an overview. You can base your new scene on one of these examples, or you can reuse existing models of robots and grippers.

The WorkCell Format page gives an overview of the possible XML tags. Use this page as a reference when building your scene.

The programs shown below loads a workcell from the file given as argument on the command line. If loading of the workcell fails, the load(…) function will print an error message and return a smart pointer that is NULL. Always remember to check if the returned pointer is NULL with the isNull() function.

See C++ Interface for more information about compilation and execution.

See Java Interface for more information about compilation and execution.

See Lua Interface for more information about execution of the script.

Traversing the devices of a WorkCell¶

You can for example traverse the devices stored in a WorkCell and print their names like this:

Notice that the templated versions of findFrame and findDevice makes it possible to get a specific type of Frame of Device directly. Always remember to use the isNull() function on the smart pointer to make sure that the Frame or Device is actually found in the WorkCell. You might encounter segmentation fault errors if you try to use a null pointer.

In Python, Java and Lua the templated functions can not be used. The system for doing this is clear from the examples.

A very important aspect when working with RobWork is the understanding of its use of Stateless models. To illustrate stateful and stateless we give two small code examples:

The benefit of a stateless design is primarily that multiple threads or multiple methods can use the same Device model at the same time. E.g. methods for visualisation can visualize a device in one state, while a user is setting the configuration of a device in another state. This effectively reduce thread related issues and also limits the need to copy the models around.

Algorithms for workcells often do not operate on the level of frames and the values for frames. Instead they operate on devices (rw::models::Device) and configurations (rw::math::Q) for devices.

A device controls a subset of frames of the workcell. Different devices may overlap in the frames that they control and one device may contain one or more other devices (rw::models::CompositeDevice). A workcell for a factory application can for example have one device for a 6-axis industrial robot and another 2-axis device that controls the position of the base of the robot. These two device may be combined into one large 8-axis device (rw::models::CompositeDevice).

Algorithms for devices often assume that only the configuration for the device is changed while the state (rw::kinematics::State) of the rest of the workcell stays fixed. A path-planner may for example return a path in the form of a sequence of configurations together with the common workcell state for which the planning was done. When writing or using such algorithms you will often have translate from a configuration for the device to a state of the workcell. This is accomplished by the methods rw::models::Device::setQ() and rw::models::Device::getQ(). This is example shows to convert a sequence of configurations for a common state into a sequence of states:

This utility function is also available as rw::models::Models::getStatePath().