Motion planning is about planning a collision free path from one robot configuration to another, avoiding any obstacles in the workspace. In the core RobWork library (rw::pathplanning namespace), there is an interface for such planners called QToQPlanner. RobWork provides a pathplanning library with implementation of various planning algorithms. These are found under the namespace rwlibs::pathplanners and implements the QToQPlanner interface:

See the API documentation for each of these classes for references to litterature and more information about possible variants of the algorithms.

We will use the SimplePA10Demo scene for demonstration of pathplanning. This scene has a Mitsubishi PA-10 robot mounted on a gantry. To move from one location in the scene to another requires pathplanning to avoid collisions. 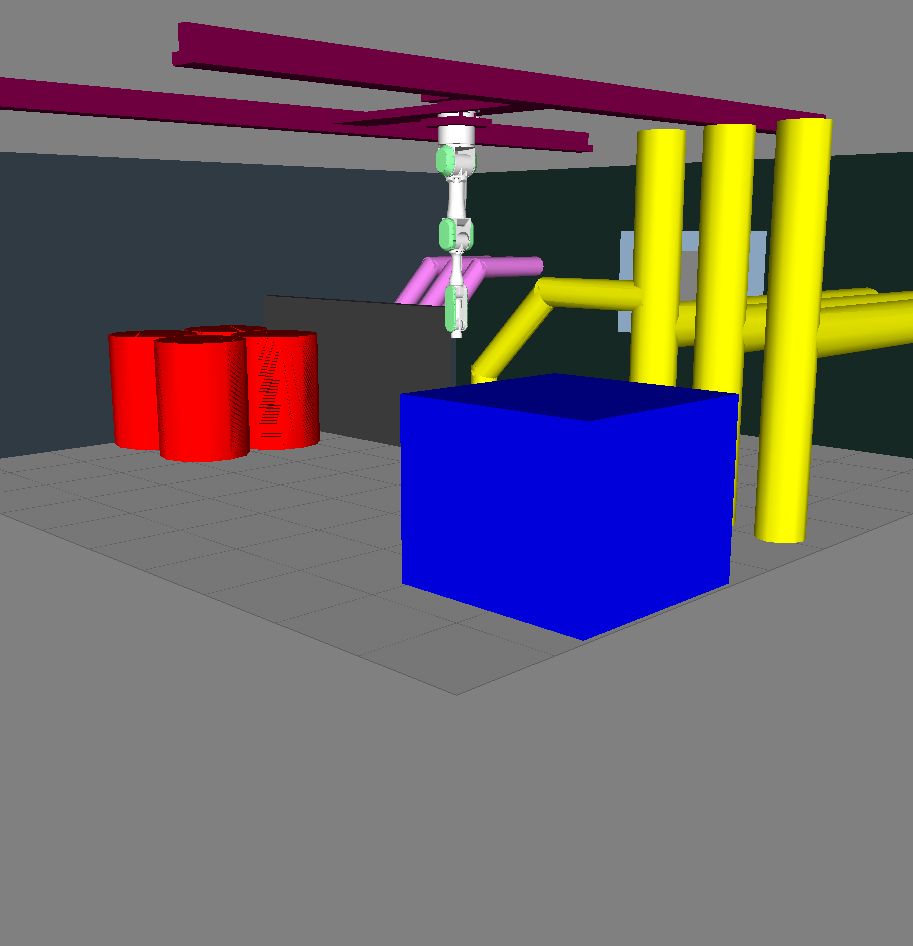 Metrics available in RobWork include:

These build-in metrics can be instantiated for configuration types (rw::math::Q) and other vector types such as rw::math::Vector3D and std::vector<double>. This program shows instantiation and expected output for 3 different metrics:

For use in planning the IK sampler interface (rw::pathplanning::QIKSampler) hides details of selection of IK solver and start configurations for the solver. The program below tests the default iterative IK solver for a device. The program selects 10 random base to end transforms for a device using the forward kinematics for the device. Using the default IK sampler, the program then checks that an IK solution is found for all transforms. Only a small number of start configurations are used for each target transform, and therefore the IK sampler might not always find an IK solution. If the IK sampler is constrained by the requirement that the IK solutions must be collision free, then solutions for only a subset of the target transforms are found.

Important variations of this interface includes:

These 3 planners all represent the resulting path by a sequence of configurations (rw::trajectory::QPath).

The path planners of RobWork are placed in the library rw_pathplanners. The example below instantiates a path planner for the first device of the workcell and plans a number of paths to random collision free configurations of the workcell. The full configuration space path mapped to the corresponding sequence of states (rw::kinematics::State) and written to a file that can be loaded into RobWorkStudio using the PlayBack plugin. The example makes use of configuration space sampling and path planning constraints described in these earlier sections:

The path planner of the above example is based on the SBL algorithm. This example shows instantiation of some more of the available path planners:

Variations of these constructor functions have options for example for controlling the configuration space exploration of the planner.

This program constructs a collision detector and corresponding default planner constraint for the first device of the workcell. The program calls the planner constraint to check if the edge from the lower to upper corner of the configuration space can be traversed:

Configuration space sampling is a useful tool for path planners and various other planning algorithms. 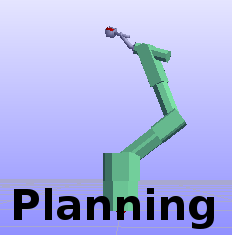 This example shows how pathplanning can be done in a LUA script. You can run this script directly in the RobWorkStudio LUA plugin. If you want to run the script without RobWorkStudio, see the Standalone LUA section.

In lines 8-26 the WorkCell is loaded, and the two devices ‘Gantry’ and ‘PA10’ are extracted. Rember to check is the returned smart pointers are null, as this would indicate that something went wrong. If you continue without checking, you will likely end up with segmentation errors.

In lines 28 and 29, we first get the default state of the workcell. This is used to construct a new CompositeDevice. The CompositeDevice will make the two devices act as one device to the pathplanning algorithms. As the PA10 device is placed at the end of the Gantry device, we specify the base frame to be the PA10 base frame, and the end frame to be the PA10 end frame. The name of the device will be “Composite” and we construct the CompositeDevice from all the devices in the WorkCell (assuming there is only the two). If you only have one device to plan for, there is obviously no need for constructing a CompositeDevice. Instead, use the device in the WorkCell directly.

In lines 32-35 a CollisionStrategy is created. We base this on the PQP strategy. Remember to check that the returned smart pointer is not null before continuing.

In lines 40-51 the initial and goal configurations are defined. Before planning, we first check that these are collision free. The CollisionDetector uses the ProximityData structure to speed up collision detection by performing caching inbetween calls to inCollision.

Finally, in line 43-56, we do the actual pathplanning query. The result will be stored in the PathQ object, and we print the size of the path.

You must tell LUA where to find the native RobWork libraries. This is done in the first line by appending to the LUA cpath. In line 2-4 the necessary native libraries are loaded. The question mark in line 1 is automatically substituted by the names given to require.

Lines 6 to 18 is optional. By default, the imported package functions are refered to by scoped names, such as ‘rw_pathplanners.RRTPlanner’. By using the openpackage function, all these scoped names are moved to the global table. That means you can refer directly to the RobWork types, for instance with ‘RRTPlanner’ instead of the longer ‘rw_pathplanners.RRTPlanner’. To just import a single type to global namespace, you could instead specify

After this initial import of the native libraries, the script in the LUA section can be run.

Below is a list of relevant API references to the types used in the example, in the order they are used. Use this if you want to know more about options and finetuning of the algorithms.